Wow, it's been a long, long time since I've posted to this blog. I must apologize for this. With the expansion of Spectrum Games due to increased demand for product, things have become hectic, to say the least. Not that I'm complaining, mind you. After all, 2012 was Spectrum's most profitable year by far. Now, as we cruise along through 2013, things look to be even brighter this year.

But that's neither here nor there. We're here to discuss Cartoon Action Hour: Season 3, right? So talk about it we shall.

Two words sum up what has been going on with the game's development since I last posted: drastic change. Okay, that's not completely true. To be more specific, we've gone back to something that more closely resembles Cartoon Action Hour: Season 2. After a lot of scrutiny and playtesting, the system as described in the older posts (which I have now deleted, as they're no longer relevant) simply didn't hold up, nor did it feel like the retro-toons.

So, we went back to the drawing board and came to the conclusion that the core of Season 2 was pretty much perfect -- it was the trimmings that really needed to be fixed. We would go back to Season 2 and use it as a basis for what was to come. And, boy, am I glad we did! Things started falling into place beautifully, as if this had been the answer all along, just waiting for us to come to our senses.

Before it sounds like Season 3 is essentially just a slightly tweaked version of Season 2, please allow me to state emphatically that this is not the case. Sure, it's closer to Season 2 than to what I had posted in this blog, but it's still its own beast.

We placed the Season 2 system under a microscope and asked ourselves how we could make it faster, sleeker, more dynamic and more faithful to the retro-toon genre than it ever was before. We've been playtesting it for a long while now and although we're still tinkering with some of the rules (namely transformations and such) and nudging some numbers, the game runs like a dream. Action scenes are fast and cartoon-like, character creation is uber-fast and more attention was paid to mechanically emulating the cartoons of the 1980s.

An example, you can give a Trait a special rule called "Versatile", which represents characters that can pull a virtually unlimited array of spells or gadgets out of a hat (sometimes literally in the case of characters like Presto from the D&D cartoon). Okay, that's pretty much standard issue stuff for roleplaying games these days. But here's where it gets truly cartoony: there's a variant of that special rule you can take called "comedically Versatile". It reflects those bumbling, usually-ineffective wizards and gadgeteers found in the retro-toons who often produce silly, pointless or even detrimental spells or gizmos instead of what they really wanted to whip up. The Trait will Flub (i.e., critically fail) on a roll of 1 or 2 instead of just a roll of 1, but the character earns a point of Oomph (maximum of once per scene) for his troubles. For those not familiar with the older versions of the game, Oomph is an expendable "Plot Point" type of resource that can be spend to help the character out.

The above is just one example of how the game masterfully captures the essence of the source material.

With playtesting winding down, we have launched the Kickstarter campaign for the game and, so far, it's zooming right along. At the time of this writing, the campaign has been going for just over ten hours ago and it's already 78% funded. Obviously, this development thrills myself and the rest of the Spectrum staff! We have a lot of fun and interesting Tiers for backers to choose from, ranging from small things like a phone call from Kargorr (the ineptly villainous co-host of the CAH rulebook) to much bigger things such as being allowed to work with us to create a series of your own (not to mention that we'll create a mini-comic for said series at certain levels).

So, please stop by the Kickstarter page and consider backing this labor of love. You won't regret it! 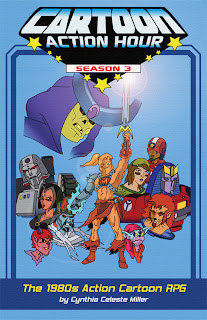 Thank you for your support!